What is MID-SIDE encoding?

Stereo sound can be represented in two ways. First you know, it’s standard Left and Right channels. There is also an alternative way to work with a stereo recording, viewing it as Mid Side.

Mid is the channel that represents the sum of the left and right channels.

This is how Mid/Side decoding is represented by an equation:

Look at the picture to see what the inversion of a signal (reversed phase) looks like.

By the way, the green line represents the sum of the signal and its inversion, that is equal to 0. Technically speaking, the zero sum of the phase-reversed waves can be illustrated by feeding them into one speaker. The speaker membrane moves with the waves producing the sound, but it can not move in the opposite directions at the same time following two opposite waves. Hence, when two opposite waves affect the speaker membrane simultaneousely, it stays calm and produces no sound. The sum of the waves is zero. Similar mutual cancellation happens to opposite sound waves wherever they interfere with each other. By the same reason, when we listen to audio in mono, there will be no Side channel present, because it’ll cancel itself as shown in the picture.

We can listen to the Mid/Side encoding of a file the same way as to the L/R format, it’s the same stereo audio file, only represented differently.

Let’s look at the example.

Here’s a piece of audio. At the very beginning, we have KICK DRUM which is in the center of the panorama. The second hit is panned at 100 RIGHT

I will now use the S1 MS Matrix plugin from Waves. This decoder splits the stereo sound into Mid and Side channels.

As the output, we’ll get the following: 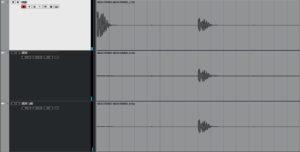 When we listen to this audio, Mid and Side have opposite phases after Mid/Side decoding and are mutually subtracted. However, the reversed-phase Side, which is marked as Side 180, stays in the right channel. So we have the first kick sound in the center, but the second on the right.

When we listen to this audio, Mid and Side have opposite phases after Mid/Side decoding and are mutually subtracted. However, the reversed-phase Side, which is marked as Side 180, stays in the right channel. So we have the first kick sound in the center, but the second on the right.

Mid/Side technique and the stereo width

Then why do we need Mid/Side technique? There is a practical reason, this representation clearly shows stereo width and helps to work with it. Particularly, the Side channel represents the width of the stereo. The louder the Side, the wider the sound, it’s that simple. So, Mid/Side technique gives us a clear picture of how wide the sound is.

The Vectorscope and Correlation Meter can be used to control the volume of the SIDE channel.

In this case, the Vectorscope is in the middle in the form of a 2D picture of a stereo image, and the Correlometer is on the right. It has gradation from -1 to +1, where +1 is a completely mono sound (Mid and no Side), and 0 is the exact opposite (Side and no Mid). The 0 value shows that sounds have been 100% pan-normalized to either side, but without the use of audio expander plugins. A perfect stereo mix has this value somewhere between 1 and 0, showing the perfect balance between Mid and Side channels.

However, if the value falls in the negative span, it means that the Left and Right channels contain some amount of identical but phase-reversed waves. This happens because of the use of stereo expander plugins. Usually, these algorithms work with the Side and increase its loudness in the process. Then what happens is, both channels will contain an extra boosted part of the Side channel. This will increase the perceived width of the stereo, but when converted to mono, those extra boosts will eliminate each other when united, leaving your mono much quieter and weaker than the stereo was.

Plugins that work with Mid/Side encoding

Mid/Side encoding has many useful applications. Applying different effects to only Mid or Side channels, for example, using Mid-Side EQ, you will be able to work with the center of the mix or with its sides, affecting directly the stereo width. Of course, these tools must be applied after all the panning is done and you like how all the instruments and vocals are spread around the stereo image. 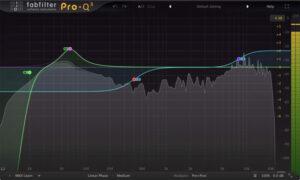 One can use the following types of Mid-Side processing:

If the sound is greatly expanded with the help of a stereo enhancer, as we said earlier, the stereo audio output will contain a very loud SIDE channel, and when an expander is applied to the full extent, the Mid channel will almost disappear. And since the Side channel will be in the opposite phases in the Left and Right, when converted to mono, the song will become much quieter or almost turn into silence. Keep this in mind when applying any stereo expansion methods.

Now, as you learned all you need to know about Mid/Side encoding, you are ready to return to our article on How to create a wide stereo.