How to get wide stereo sound in mastering

Listening to a professionally mixed and mastered stereo song leaves a bright and spacious impression. Instruments and vocals are spread through the virtual space and appear as coming from different points around the listener. With mixing and music mastering, wider stereo can be produced, but it’s not as easy to make as it may seem.

Creating this harmony requires experience and skills of an audio engineer. If stereo widener mastering is done by an amateur using simple stereo enhancers or just Mid-Side EQ,  there is a good chance the song will not be compatible with a lot of audio systems, and will sound imbalanced or weird on some speakers.

So how can one arrange an impressive stereo image working with stereo width in mastering? In this article, we’ll be talking about the best approaches to accomplish this goal and the most common traps the audio engineer will have to avoid on the path.

What is stereo width

A stereo recording usually has different signals in the left and right channels,  as opposed to mono, where there is only one channel (or the recordings for both channels are identical).

Wide stereo is the term that suggests that this difference between the channels is substantial and supports the rich sound and an illusion of virtual space.

Stereo width also can be described as the loudness of the Side channel, compared to the Mid channel. If you are not sure what Side and Mid are, or just wish to refresh it in your mind, follow the link now and read our short article Mid and Side channels explained.

If you are familiar with Mid and Side channels, you must know that automatic stereo widening is focused on these channels. The stereo widener mastering plugins increase the volume of the Side. As the Side channel represents the differences between the Left and Right, emphasizing the Side obviously makes the song wider and more spacious.

Using stereo widener plugins usually brings phase issues to the recording. It occurs when we transform the stereo signal with an enhanced Side channel back to the Left-Right system. Our stereo channels will receive identical audio waves with an inverted phase, and it’ll cause wave correlation problems. And then, though the stereo may sound nice and loud, the mono will become not great and much quieter.

Why do you need to pay attention to mono? 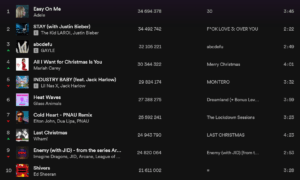 Why do we need to think about mono at all? We want our music mastering wider, everybody listens to stereo now, right? Not necessarily. When the music sounds from your phone, laptop, or just ten feet away from you, all you hear will be mono, not stereo. And the least you want for your song is to sound weak or weird in mono.

Check for yourself, analyze the top-chart hits for the past 10 or even 20 years. The vast majority of them weren’t mixed in wide stereo, those recordings are almost in mono. As if their producers knew even on the mixing stage that the songs would be played everywhere, in cars, in shopping centers, from windows and using a cheap radio. It could be a loud and wild mono, but as soon as we hear the tune, we find ourselves singing along in our minds before we know it.

No matter the format, how your song sounds in mono might still be the most important. Maybe you are going to release it in stereo, or in Dolby Atmos 3D audio format, remember, always check how well the mono version sounds.

How to make a mix sound wider?

Most of the panning that is done during mixing contributes to stereo width, but not only this. Let us look at some mixing steps that are done to capture the listeners attention with the differences in the right and left speaker.

Tips for creating a wide stereo while mixing

To sum up, stereo width means spreading the elements of the music across the virtual space that surrounds the listener, bringing the diversity to the left and right channels.

Professional mastering engineers know that mastering stereo widening is not the best choice, the work must begin on the recording stage and is perfected while mixing. This inevitably involves working with tracks and effects separately on the stage of mixing. If a mastering engineer spots width issues in the song, the best way to solve them is by returning to mixing and making it sound more spacious.

However, when returning to mixing is not an option, and the mastering engineer determines that the mix is narrow, then he or she can use stereo expander plugins for mastering stereo widening.

There are many great plugins you can use for expanding stereo width in mastering.  Let’s look at some of them.

Stereo expanders, stereo enhancers. The best of them are:

Mid-Side equalizers, to name a few:

However,  these music mastering wider plugins should be used only if your song’s sound is really narrow and lacks stereo width.

Also, note that plugins like chorus or dobler shouldn’t be used during mastering at all, that’s why we have not mentioned them in the list.

How to determine if the track lacks in width?

The width of a stereo recording can be measured simply by using a correlometer. This plugin returns the result from -1 to +1. You want your L and R channel to be in the correlation range from 1 to 0.

If the corellometer returns a 0, it means that the signal in one speaker is completely different from the other. If it is equal to 1, then we know that the right and left channels are identical, it’s a mono recording. So, if a correlometer shows you the value close to 1, you’ll need to widen your audio until this value is somewhere in the middle between 0 and 1, or closer to 0. Then you’ll know that your song is wide enough.

If the correlation is between -1 and 0, it means that your channels have phase issues and will be cancelling each other to some extent, and the song will have shortcomings if played in mono.

Working with the stereo width of your song it’s easy to get caught in the beauty of a stereo image and forget about the mono version. However, you don’t want to make this mistake. While performing the widening, you need to repeatedly check how the music you are developing sounds in mono. If you don’t do that, and don’t make sure that the mono sound is great and exceptional, you are one step away from ruining your song completely.

Need your song mixed and mastered?

Looking for help with mixing and mastering? Ask us! Major Mixing studio helped many artists create unforgettable hits on their way to success. We create wide stereo mixes that sound great on any device. Each member of our team is an experienced audio engineer, and we’ll be happy to answer your questions and help you produce the amazing songs you have in mind.