How to MIX Rock Music: Mixing Tips and Tricks

Mixing rock music is an extremely difficult task that requires creativity and practice. In this blog post, our mixing and mastering studio will share some tips and tricks for beginners on how to mix this genre. It’s great if you already have some mixing experience and knowledge, it will help you easily understand all the rock mixing tips that we are sharing here. These steps of our mixing tutorial will hopefully give you a new perspective on how to mix rock music! 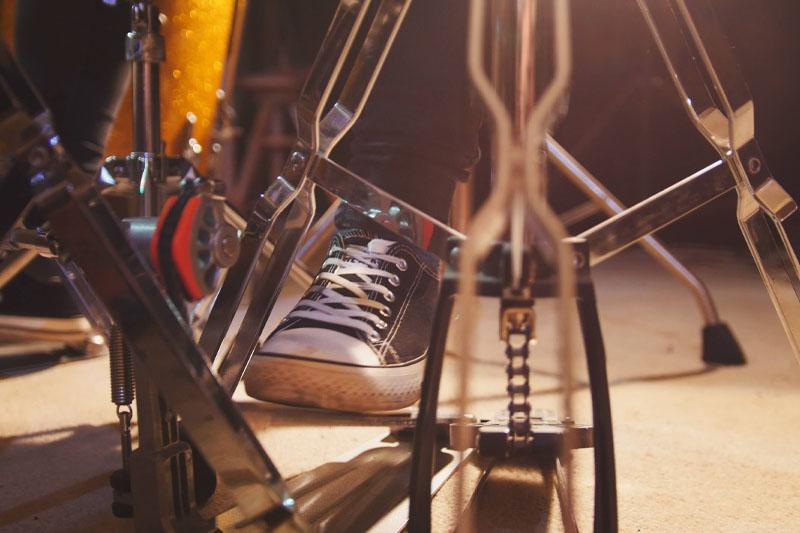 If you have done mixes for other genres, like pop music, for instance, you can hear that low-end kicks are core elements of the tracks. Kick leads the rhythm and creates the groove, it’s big and appears on top of the mix.

But rock is very unique. Even though it has a distinct rhythm and the drums play the main part in creating it, kick here is just one of many instruments and not the king anymore. Here kick adds attack to bass guitar and is a team player. There is no need to make its sound too huge.

In the case of rock mixes, use our small tip – The faster tempo, the shorter the kick should be.

How do I change the kick drum sustain?

First of all, you can do it using a gate. Try different release times to find the best sound for kick and enough space for bass.

The second way is to use different EQing for different tempos. That’s because different frequencies have different sustain (or the time for which one kick sound lasts). So, in practice, the lower the frequency is the bigger is the tail on the kick.

Then use a compressor, by changing the attack and release time you can modify your kick.

By the way, here is our article about compressor attack and release time.

2. Aim for the best snare sound 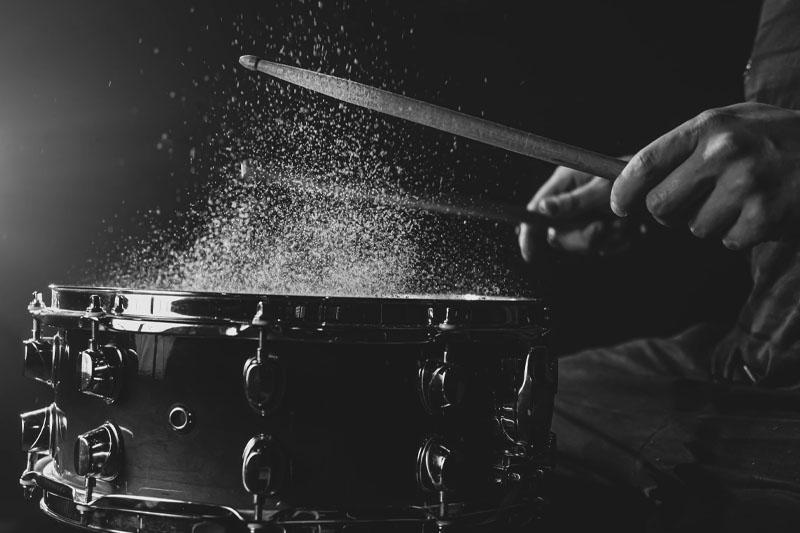 Of course, everything is important, especially in a rock mix, where there are quite a lot of elements to work on but do pay special attention to the snare sound. It often makes a trademark of the music, and you will instantly recognize a rock track just by the sound of this drum. Quite often the listeners know it’s their favorite band playing, once they hear the sound of the drums.

Usually, a good recording engineer capturing rock would give high priority to a snare drum and overheads. So in this case, you will receive a multitrack with a good and rich drum part.

However, in the case of low recording quality, you can use triggers to improve the snare.

3. Analog distortion is the key effect 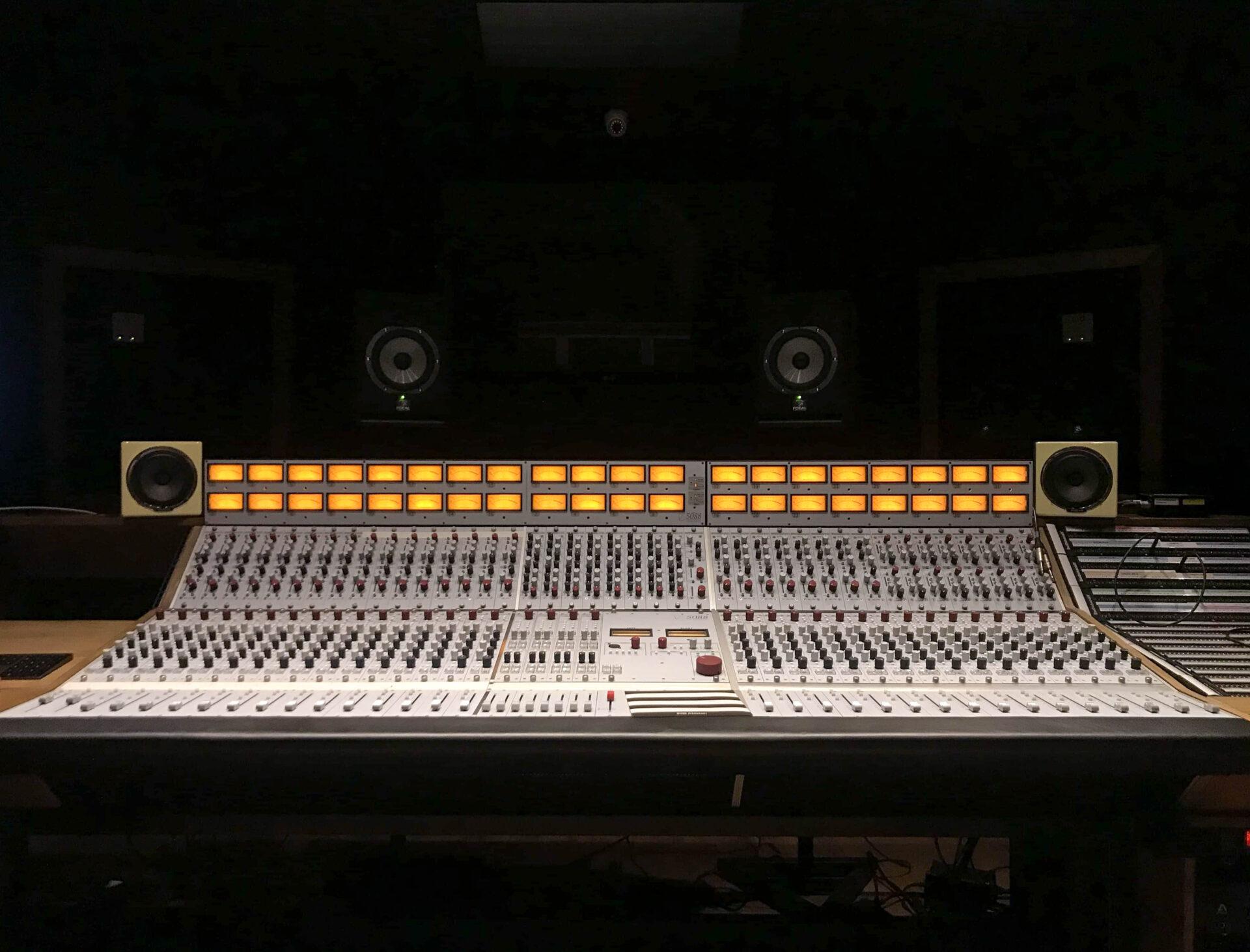 Most musicians agree that there wouldn’t be rock music without analog distortion. Creating color, warmth, bringing forward the guitar, adding character to the voice, emphasizing the drums and making them bigger, brightening up elements – analog distortion has quite a few roles in a mix. Instruments sound unique and distinct with it. Rock and analog distortion walk their road of fame hand in hand.

A professional mixing engineer would use distortion almost on everything here. Historically, every classic rock mixdown was made with an analog console. This is the first way to get distortion. We use an analog console for hybrid mixing and adding color to the sound.

Analog gear helps glue the mix together, gently clipping the peaks and adding warm saturation. Because of this soft clipping, you can make some elements louder, and their sound acquires analog charm.

Applying saturation to subgroups will result in quieter peaks with the same loudness.

But don’t forget, that analog mixing can not help improve the quality of the sound and poor recording. Analog distortion is used to add special beauty to a mix that is already good and high-quality.

Midrange frequencies are predominant for this genre. Basically, any rock song is placed in this range. You can cut low end with a high-pass filter, and cut high frequencies as well, and a rock song will not change much. Of all frequency spectrum, you should put your focus on mids the most while mixing this genre.

All the elements of melody, vocals, guitars, kicks, hats, snares, the whole groove of a rock song, all of them are in the middle. Even the drums here are higher, and can not be compared to pop and hip-hop low end. That is why when we mix, we need to pay attention to the middle frequencies roughly from 200Hz to 5 000 Hz.

However, we must place everything together correctly inside this frequency range. There’s not so much space as you see, and there’s a lot to fit in. It’s hard, and the mix engineer needs good experience so that the snare does not clash with the guitar, the guitar does not mask vocals, etc.

Rock is loud, intense, and the sound is huge, that’s why some may think it should be heavily compressed, but that’s not entirely true. Rock must have a large dynamic range as well. In this genre, if instruments are heavily compressed, for example, drums, they become dull, not expressive.

Dynamics is everything in rock mixing. Only the contrast between the quiet and the loud sounds make the composition feel real-life and breathing. Good dynamics allow hats and snares to jump up to you with every beat and the guitar feels alive. But how then the final mix is made so loud, intense, and dynamic at the same time?

Parallel processing helps to keep original dynamics. It unites compressed or processed in another way deep and powerful sound of an instrument with the dry version. This way, you get deep and fat sound successfully preserving the original dynamics in all its beauty. 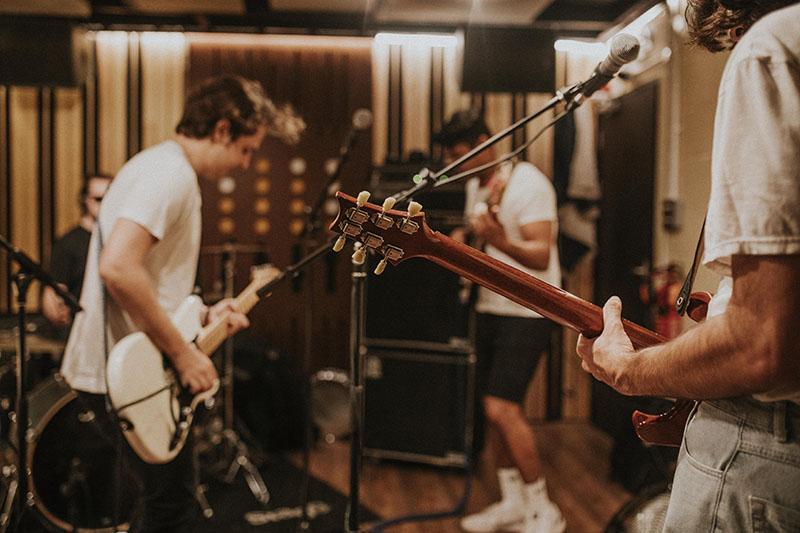 Rock originated as live music, and it’s all about the art of performance people can listen to. That’s why, while pop music is being edited a lot, and sometimes in the end you see a song that’s drastically different from its recording, in rock we see the opposite. In rock we do not auto tune things, the basis of it is the highest quality live performance and recording.

That’s why a rock band can spend many months in the studio practicing and recording one album. Everything should be big, great, and professional.

The lead vocal here doesn’t use Melodyne, Autotune, or similar corrections and audio effects. The specifics and natural imperfections of the lead vocalist’s voice bring distinct individuality to each particular band and should not be changed. In this genre, the lead vocals can perform complicated songs well without relying on further digital editing.

The real sound is the basis of this genre and its main idea. Generally, in rock mixes, the mix engineer should enhance and empower the natural performance of the band, and not harm it in any way.

However, all that has been said is true in case the recording is really of high quality as it should be. If there are big mistakes either in performance or in the recording, editing is inevitable. But then this will probably not result in a great mix anyways. 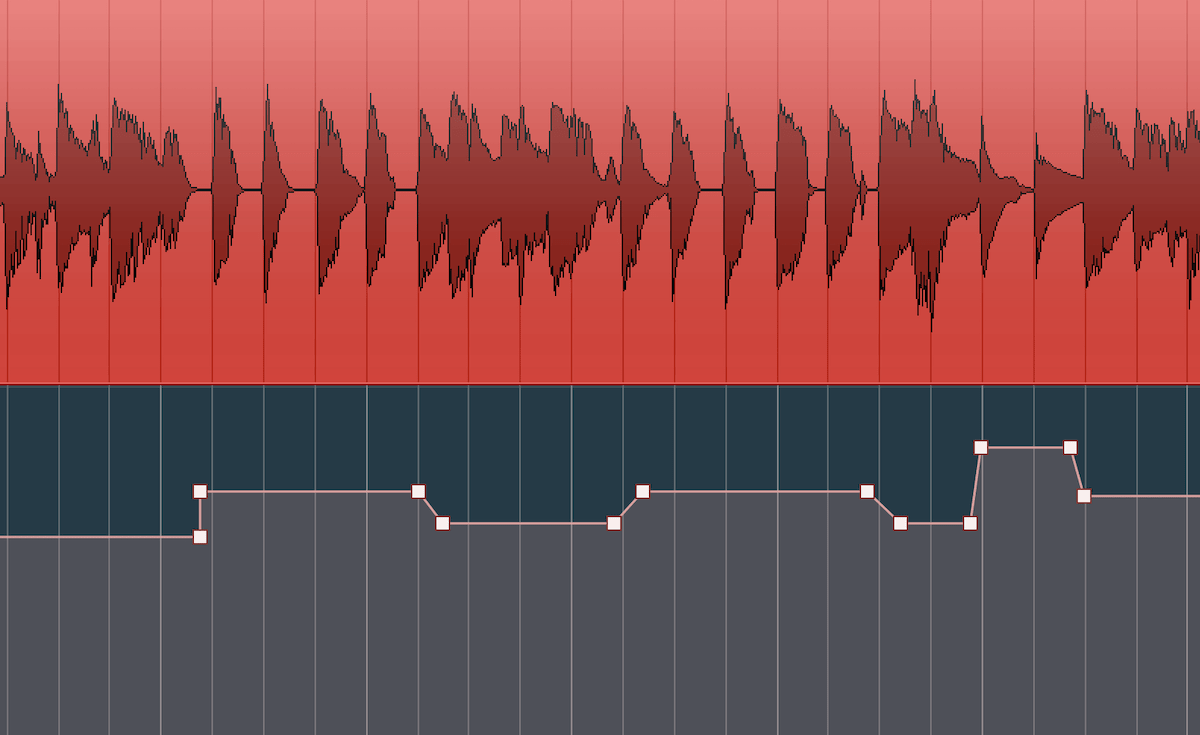 From the legendary rock albums back in the nineties, automation has become the essential part of mixing this genre. Without automation, it’s extremely hard to achieve the right character of rock composition. It helps open up the chorus, emphasize the guitar part at times. Automation helps make a rock song alive, moving, changing all the time, and this life is the essence of rock song mixes.

Automation is not only an old tradition, it’s an irreplaceable part of the mixing process. You will not be able to mix a rock song well without using automation. The drums will sound dull, the vocal will feel smaller in a chorus, the guitar will not have the needed dynamics.

Always use automation with your plugins to breathe life into the songs and make them more changing, emotional, and expressive. 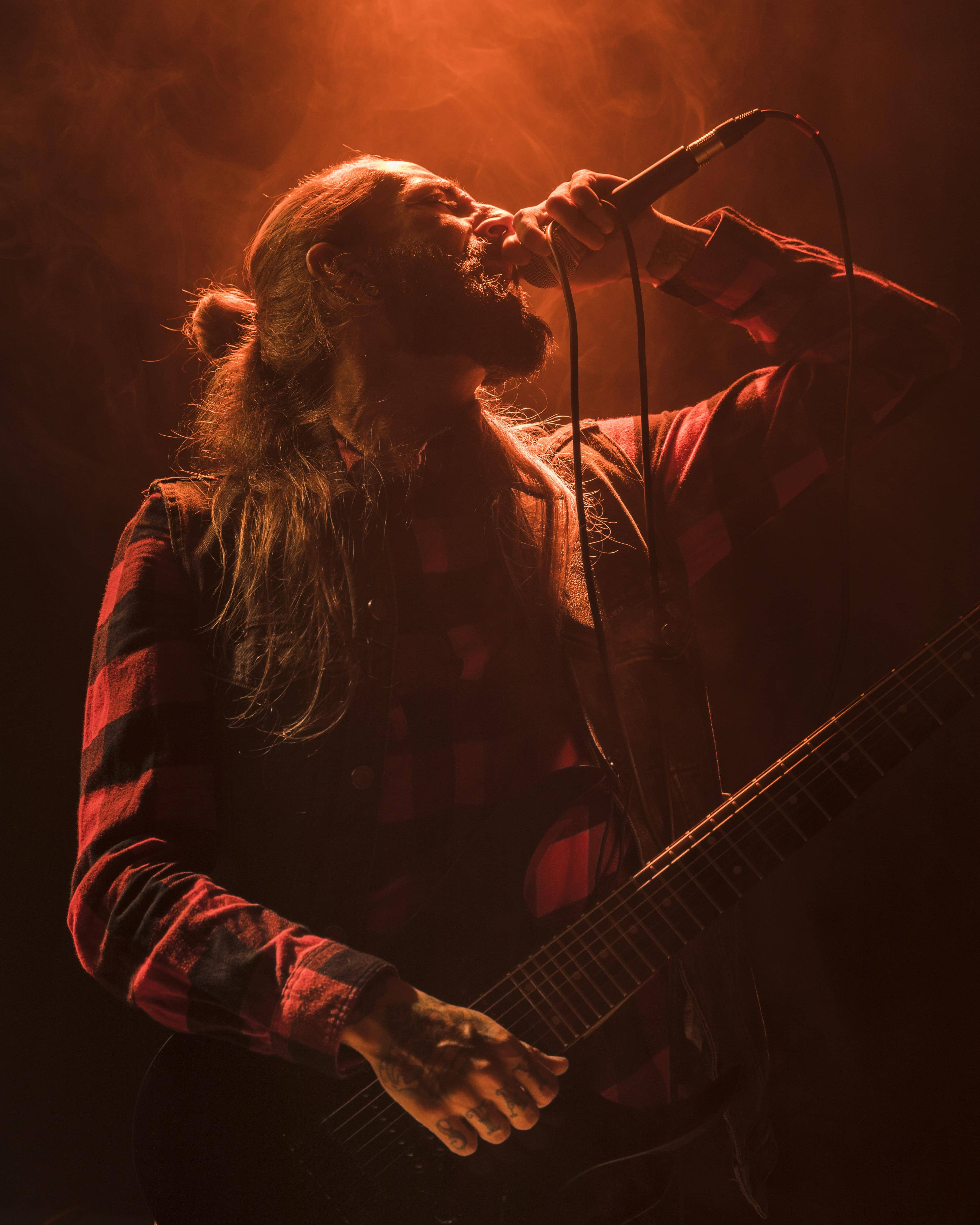 In rock songs, solo guitar works together with the lead vocal. They are both equally important, and constantly take turns in assuming the leading role during the performance. That’s why, in order not to lose harmony, lead vocal and solo guitar should be treated in the same way.

If the vocal is wet, the guitar should be wet also. The plugins that are used for mixing the vocal should be considered for the lead guitar also. They should be compressed similarly, have similar reverb and other effects.

Rock has always had tons of reverb. With compressed guitars and everything loud and wild, it’s hard to make each instrument and vocal visible. That’s why the effects we use with rock are big and powerful. There are always huge waterfalls of reverb in rock mixes, and so it should be.

The difficulty is that, as we said already, there is not much space where you can place all the instruments. All the elements are positioned from upper bass to upper midrange, and your goal is not only to make them loud and distinguishable, but each has to have room and place in the mixdown.

10. Choose the professionals for rock mixing

Rock is an extremely difficult genre to mix. It should be mixed according to the established rock standards, otherwise, it won’t sound great. In pop music, you can experiment with mixing and try your own approach as an amateur. But in rock, you can not do that. It’s a lot like classical music, it’s complicated, only professionals can reproduce its perfect sound.

If you don’t have enough experience, find a skilled audio engineer who can mix the song for you. Here at Major Mixing, we have been working in music production and with rock songs for more than a decade.

We know all the details and hard parts of mixing this genre from our vast experience and will create an industry-quality record for you. We know how to make the sound powerful and dynamic, how to fill it with energy and emotions that will draw the listeners to your music.

We are interested in your success. Send your multitrack to us, and in three days you’ll receive a professionally mixed rock song, exactly as it should be.