How Loud Should My Master Be?

The average loudness of master records for the music industry in 2022 is around -8 RMS, about -10 LUFS, with the output ceiling around -0,3 dB. However, the loudness targets can vary for different genres. At the same time, each streaming platform treats the uploaded records differently, so keep reading this article to learn more.

What dB should a master be?

This is a tricky question for a mastering engineer because how loud the music is can be measured in dB in many different ways. While mastering, you’ll be paying attention to these measurements in particular: Peak, True Peak, LUFS, dBSPL, and RMS.

The most important loudness evaluation for mastering, which is used by all the platforms, is LUFS. So, to ask how loud should you master your music to, you need to identify what exactly you want to measure. 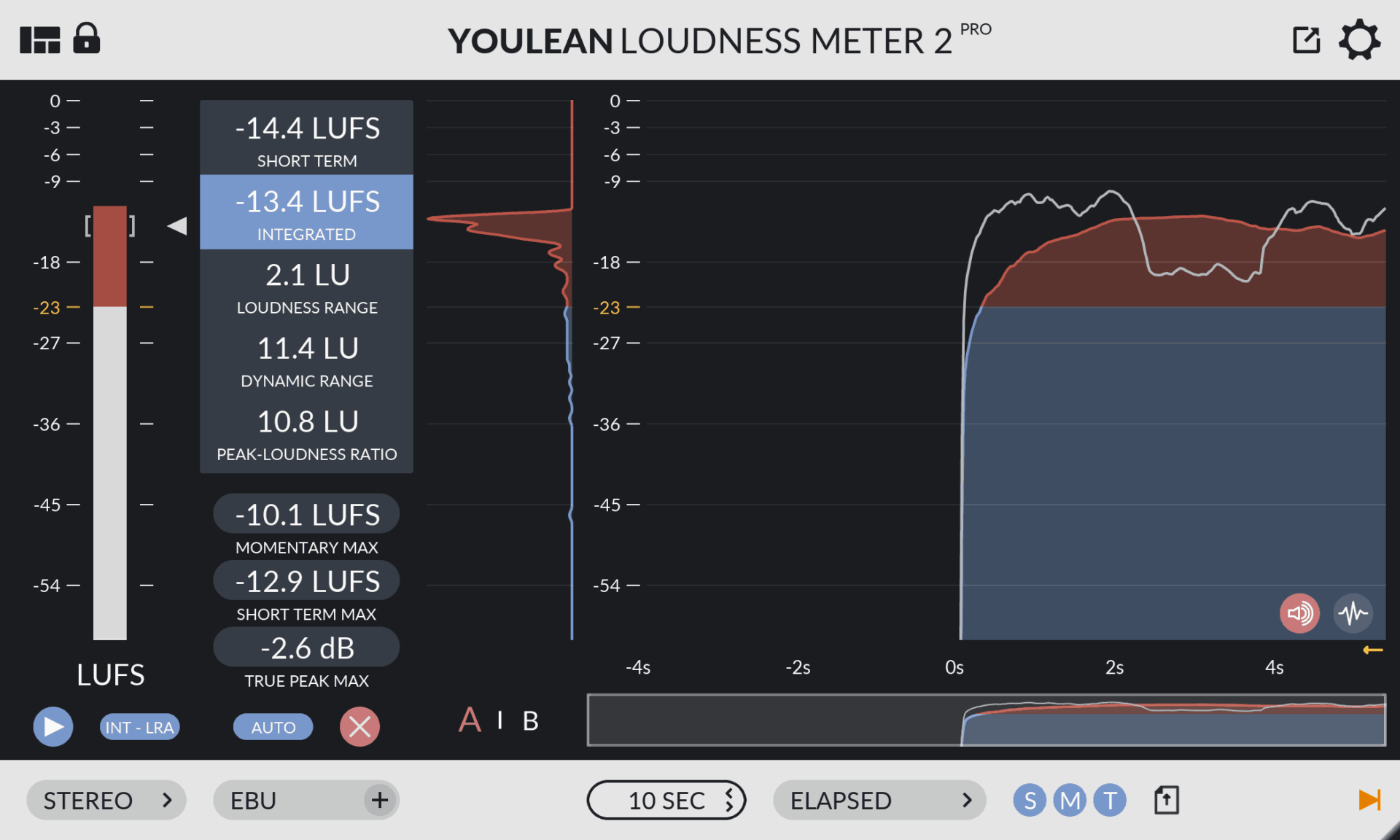 In this article, we are talking about the integrated loudness (integrated LUFS), streaming services use this measure to determine the overall loudness of the songs and to make sure the streaming maintains relatively similar loudness from one song to another.

This way, the platforms ensure great listener experience, so that the listener doesn’t have to change the volume of the playback device all the time. All the music sounds to the listener as if it has the same volume.

How much loudness do you need for mastering?

All songs are different, you may choose the loudness depending on your style and genre. Of course, a loud EDM music and an acoustic ballad will have different loudness. So every type of music has its normal loudness level, but the numbers vary greatly even inside one genre.

We could name here the styles and their approximate loudness, but there will be no point in doing this. Nowadays everyone decides for themselves how loud their release should be.

That’s why you will come across a rock track mastered to integrated LUFS value of -8 or -9, or a pop track, mastered to -7 LUFS, at the same time, some aggressive EDM master may go as loud as -5 LUFS. So, the main idea here is to find approximately the right range for your genre and keep your loudness within those limits.

How loud should my master be in RMS?

RMS measures the average power of the sound throughout the song. It’s an abbreviation of “root mean square,” which is another way to calculate the average value. The more power is needed to reproduce the sound, the louder it seems to our ears, so RMS is a pretty good measurement of the loudness of the music.

You can use RMS meters to monitor your track’s loudness, but mostly for your own work. Because almost all the platforms will look at the LUFS measurement.

Generally speaking, mastering to -9 – -8 RMS will give you an industry-level, pretty loud song.

How many integrated LUFS should I aim for?

As we see now, most master records are louder than this limit. This happens because the streaming services, like Spotify for example, will normalize the song to -14 LUFS anyways. So the sound will be basically the same if you master the song to -14 LUFS or louder, it will still be streaming with an integrated LUFS value of -14.

It’s not a great idea, though, to master quieter than -14 LUFS. There are several reasons why it’s not good to do so.

Three reasons not to master too quiet:

This means, that if you make a universal master record, which you are going to upload to a bunch of streaming services, you want to make it not quiet, but rather a bit louder than -14 LUFS

How loud should my master be for Streaming Services?

Each service normalizes songs using its own algorithm. Let’s now look at the streaming services one by one.

If you’d like to learn more, we have a special article devoted to mastering for Spotify: Spotify LUFS and how to master tracks for Spotify, check it out.

This service will normalize your song to around -16dB LUFS, bringing the volume up or down if necessary

This platform normalizes the songs similar to Spotify, bringing the volume up or down to match the loudness around -14 LUFS int.

For music videos, YouTube also has a standard loudness targets of -14 LUFS. That means that the volume of your song will be reduced to match the standard. Unfortunately, if your song is quieter than -14 LUFS, YouTube will not bring the volume up, so keep this in mind.

Sometimes you can notice that artists make different mixes for different platforms. The version they upload on YouTube, for example, is different form the same song on Apple Music. It happens not too often, but sometimes, mostly in rap genre.

How to determine the necessary loudness and dynamic range?

To determine how loud you should be mastering, you need to compare your song with reference tracks from your style and genre and determine the loudness targets.

To download a reference song, just loop back your sound card and record the stream of the song. After that, normalize the reference mix, for example, to around 0.3dB headroom. Now you may measure the loudness of the song, its dynamic range, check all the other characteristics, and compare them to the track you are working on.

When comparing the tracks for the best mastering, make sure they both are normalized to the same headroom.

How many LUFS is too many?

After reaching approximately -7 LUFS the music doesn’t sound louder anymore, it just sounds worse. And the form of the sound wave will become not so much a sine as a square because of the limiters and clippings. This is basically what happens if you are mastering louder than -7dB – -8dB LUFS.

Moreover, if your song is over-compressed and too loud, the streaming platform will normalize your track down and your music may not benefit from it. All the distortion will show, and there will be no dynamics to the song.

Look at this picture, for example, this is a song that is heavily compressed and way too louder than -14 LUFS int. 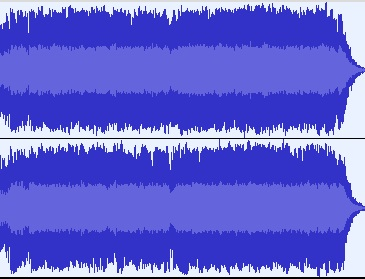 But the streaming platform will normalize it to -14 LUFS and get this: 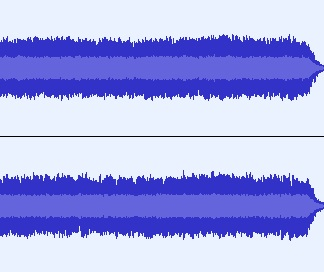 At the same time, with the same -14 LUFS, the sound wave of a more dynamic song will look like this: 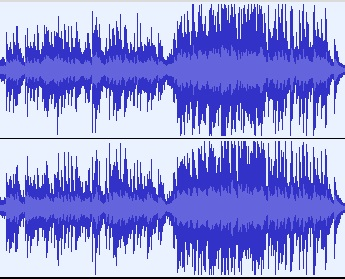 As you see, its peaks will be louder than those in a heavily compressed song. So, for the listener, it may sound more striking and more attractive.

So, how do I make a perfect song?

The conclusion to remember is, for best mastering, you need to keep the balance. You need to make your song loud (-14 LUFS or more), maintaining a good dynamic range at the same time. Every genre has its peculiarities of course, but you can determine them, analyzing the reference tracks.

Working with mixing and mastering for more than a decade, we have always seen that if a song is professionally-created, well-balanced, and sounds perfect, it will almost always be perfect on streaming platforms as well. So, if you want to sound great on a platform, the most important thing you have to focus on is creating great, professional master records.

At our Major Mixing mixing and mastering studio, our mastering engineers have created thousands of master records for all possible genres. Artists that work with us upload their new songs to all the platforms.

We have had thousands of examples to see how our master records sound on the streaming services, and we learned what is important in mixing and mastering so the song would become a chart-topper material.